October Coaches of the Month: John and Joaquin

Congrats to Coaches John Nakanishi and Joaquin Cordero on being our October 2017 Coaches of the Month!

In his third year with Eclipse, Coach John had his most successful year yet as a coach. His blend of organization, solid communication and deep knowledge of the game have made him a favorite of players and parents. He often goes above and beyond with his teams, including switching between Darth Vader and Colonel Sanders costumes at the San Ramon Boo Cup. 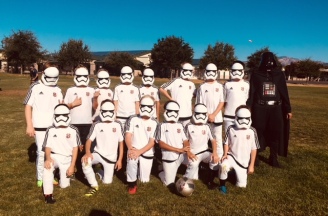 The costumes worked, as his U12 Lunar Boys finished second and his U13 Solar Girls won their first tournament ever. In true John fashion, he gave all of the credit to his players for their work this season, so we are going to give John some credit for his work! Congrats Coach John on your second coach of the month honor this season!

Former Eclipse player, Joaquin Cordero, returned to his club this fall to step into the coaching scene and give back to the club he still loves and feels a passion for. He became one of our busiest assistant coaches regularly hopping between boys teams, girls teams and even some goalie training. He did so well as an assistant coach that he was promoted to head coach of the U10 Solar Boys within a few weeks. His passion for the game and his new team shined bright, as he helped the boys to a quick and dramatic improvement to wrap up their fall season.