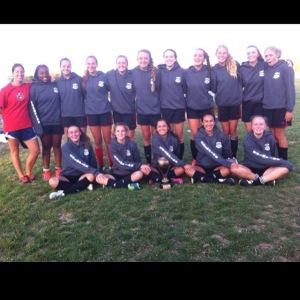 Coach Amelia Salazar is in her second year as a head coach for Eclipse. During the 2015 season, Amelia has taken over as the coach of the U11 Lunar Girls and U15 Girls. Through the mix of her background of playing at an elite level and her fun personality, Amelia has been able to find the right balance with her teams of pushing their development while allowing the girls to have fun. Both of her teams have experienced on-field success and a lot of fun off of it. Her U15 Girls have made the championship game in their last three tournaments, including two titles (Soccer by the Bay and Stockton).

Kai Weyland is our Assistant Coach of the Month in his first month working for Eclipse. Kai took over as one of the club’s goalie coaches in late September and has immediately had a positive impact on some of the younger goalies in the club. As an Eclipse goalie himself (U18 Boys), Kai is able to instill the experience he has gained as a player on to our younger Eclipse goalies. Kai is also the starting goalie at Campolindo High School where he earned 1st Team All-League honors last year as a sophomore.

Amanda Moellering is our Referee of the Month. Amanda has consistently been one of our top referees in the club all season. Through her commitment to the referee program, Amanda has gained experience and improved into one of our best referees. Although her dad, Greg, was Referee of the Month for September, Amanda would certainly win the Best Referee in the Family Award!