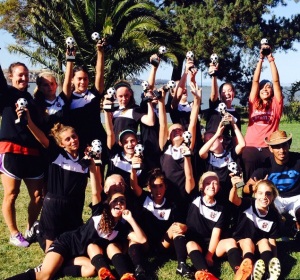 Head Coach of the Month: Danielle Johnson
Coach Danielle has been able to blend demanding training sessions while keeping the emphasis on fun. The U13 Lunar Girls have made leaps in their individual and team development this season, which has them playing a good brand of possession soccer. While Danielle has the girls playing great soccer, her biggest impact has been on evolving their passion for the game. Danielle is finishing up her second successful season of coaching for Eclipse, and we hope to have her with us into the future!

Assistant Coach of the Month: Miguel Camacho
While many people know Miguel as head coach of the U10 and U11 boys teams, he has made an effort to become a larger part of the club by being an assistant coach to many teams. Miguel’s biggest impact as an assistant coach has been at Future Eclipse where he is able to connect with the humor of our youngest kids. “Coach Nacho” as many of our younger players call him loves the game and loves Eclipse. He is always wanting to teach the kids new tricks (usually by pulling the tricks on the kids first).

Coaches in Training of the Month: Caroline Sernett and Amanda Moellering
It was just too hard to chose only one coach in training of the month, as Caroline and Amanda have both been fantastic in their roles with the club. Both Caroline and Amanda have earned this award already this year, but their commitment and hard work have made them deserving once again. Both girls are just sophomores in high school, but they have been responsible, fun and confident in their first year as Coaches in Training.

Referee of the Month: Caitlin Burnite
Caitlin has set a high standard, as she wins the referee of the month award in her first month as a referee for Eclipse. Her professionalism, responsibility, and desire to constantly improve have made her an outstanding referee. The club appreciates her extra effort to get out each weekend and ref as many games as she can despite her busy schedule as a senior in high school and player on our U18 girls team.